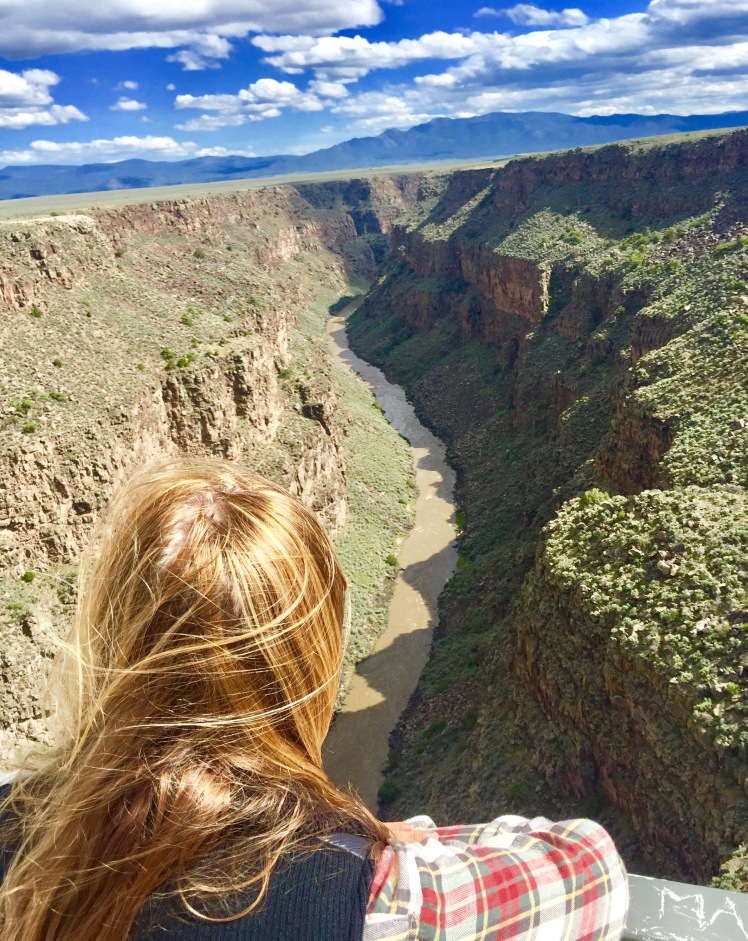 The drive to Taos from Santa Fe was an easy drive (a visit can easily be planned as a day trip from Santa Fe) but we decided to move the motor home so we could spend a few days here and explore the area. The drive was one spectacular vista after another and at the risk of sounding redundant I will say again that the state of New Mexico its beautiful. The topography from Santa Fe to Taos changes dramatically from desert high mesas to alpine snow topped mountains, very dramatic.

Our motor coach park has breathtaking views of the mountains and it’s a short distance from town and from the Rio Grande Gorge bridge. This gorge was a total surprise and we could see it from a distance as we drove in. A beautiful valley where the Rio Grande has sliced away the land to create a dramatic gorge. After we got the motor home settled in we hopped on the Jeep and drove to the bridge and walked to the middle of the span via a nice pedestrian way built on the side to admire the view and we had to hold on tight because the wind was blowing incredibly strong up there. We have learned that spring time around here is notorious for high winds. 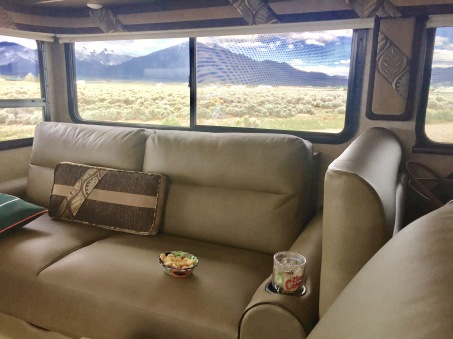 The town of Taos is a quaint, artsy town with a town plaza surrounded by art galleries and restaurants. Taos is a huge ski town but there are a lot of other summer activities around here and it’s very popular in the summer. It’s still quite chilly, which was surprising to us but the blue skies are glorious, snow is predicted for tomorrow morning!

Some of the nearby ski villages are tied together via a loop highway from Taos called  “The Enchanted Circle Drive”.  This is a beautiful 84 mile drive that takes you to the mountains villages of Questa, Red River, Eagles Nest, Angel Fire and back to Taos.

We started the drive in the morning and stopped at some of the larger villages like Red River where we visited an art gallery and the town center. All these villages are typical ski places with stores and inns catering to skiers. There were a surprising number of RV campgrounds and we learned that this is a very popular summer area where people come to get away from the heat.

Along the circle between Angel Fire and Taos we spotted a sign that read ” Enchanted Circle Pottery”. We decided to make a quick stop because I love pottery and I’m always eager to find that one piece I can’t live without. Leo was really nice to turn around in the middle of this highway, he’s always nice that way 😘. We met the potter Kevin Dekeuster as he was polishing his car on his driveway. Btw this driveway was a steep drive right off the highway and the wind was blowing our socks off up there. Kevin gave us a tour of his workshop and kilns where he explained his pottery making process. His wife, who is a well known potter as well, works along side him. They are originally from Arizona,  both have received masters from Northern Arizona University, but they have built their home and studio near Taos because of the weather (they prefer the colder climate ) the availability of recycled wood (which they use by the ton) and also because this area is such a big art center and attracts a lot of artists.

We toured their studio, which doubles as their home. It’s really beautiful how the living space is filled with their creations, it’s everywhere. Kevin’s work is more utilitarian and beautiful in its gorgeous round lines and glazes, His wife JoAnne is more sculptural in design. The couple have traveled and studied in Japan and the Japanese influence is clearly seen in Jo Ann’s pieces. She uses designs, symbols and tools that have meaning to her, including people or places that have impacted her life. She has been featured in a book “Wood-Fire Ceramics, 100 Contemporary Artist”.

I could have taken at least 100 pieces if I could afford it,  but we selected two of JoAnn’s pieces, which flow well together. They don’t sell their work in galleries or online so I know I’ll have to return here for another of their pieces in the future, this time I’ll select one of Kevin’s for balance. This is a nice thing to look forward to. 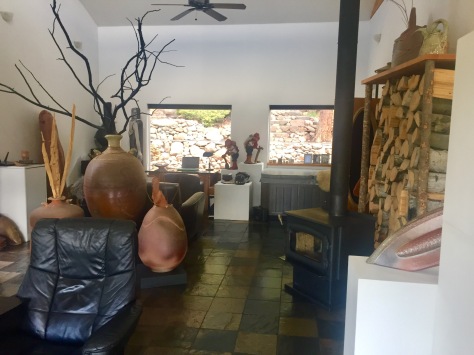 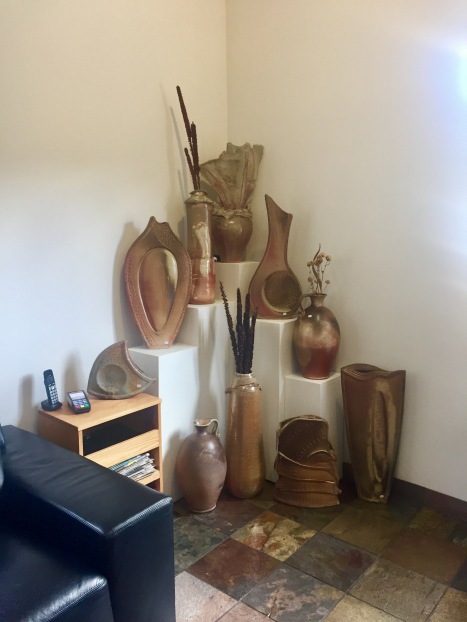 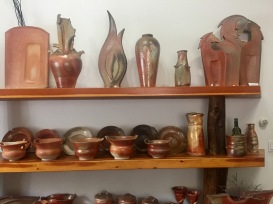 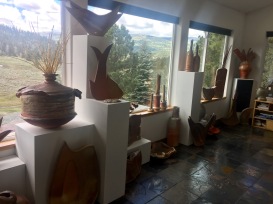 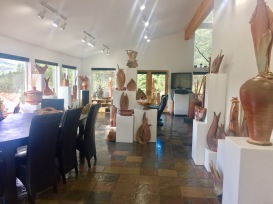 Kevin was nice enough to give us a restaurant recommendation in Taos because it was getting close to lunch time and you know how we get when we’re hungry. He asked Leo wether he wanted Mexican or South Western ( they know the difference here) Leo picked South Western and so we pointed our Jeep to Bella’s restaurant in Taos near the plaza. This place was fabulous, they made the guacamole right at the table, delicious! I ordered Chilequiles, which is a delicious fried red corn tortilla with chicken and all kinds of awesome stuff and Leo ordered the Chile en Nogada, this is a stuffed poblano chile served as I’ve never seen, with apples, raisins and pomegranate seeds on top. It was beautiful to behold. 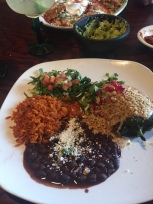 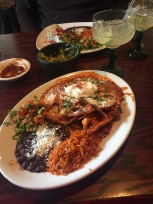 After two margaritas apiece we decided to chill for the rest of the afternoon and just enjoy the view, well Leo enjoyed the view, I took a delicious nap….heaven 😍

One thought on “Taos and the Enchanted Circle”