One of the best parts of travel is meeting interesting people along the way, and this was our experience when we met Michel and Rosemary Hayler on a Viking river cruise over four years ago. We have maintained our friendship and they have since, visited us in North Carolina. So it was with great excitement that we accepted an invitation to visit them in Hastings and explore the history rich area. With Michel as our guide and narrator, we were looking forward to exploring this beautiful part of England.

We checked into the Powder Mills Hotel in Battle which is a favorite of the Haylers and we could easily see why. This is a beautiful restored Georgian country house with a first class dining room and accommodations. The grounds are beautifully landscaped with a lake and surrounding woods making for the perfect photo opportunity. It was originally a gunpowder making mill built in the 18th century and has been restored into the buildings that make up the hotel today. Our room was lovely and very comfortable and the proximity to the medieval town of Battle make this hotel a truly great place from which to explore the local area. There is a very famous permanent resident of the hotel named George and you may run into him in the gardens or more likely, near the kitchen where he is served his morning croissant. Not a bad life for an old Peacock! 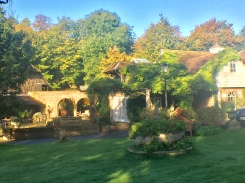 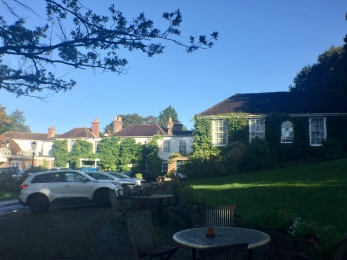 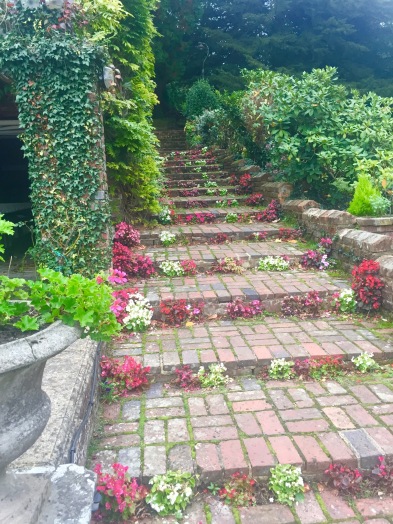 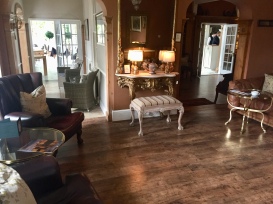 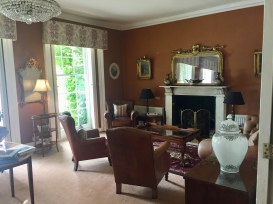 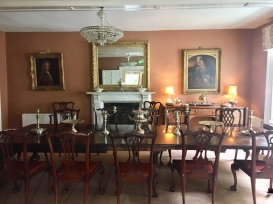 The Battle of Hastings actually took place near the town of Battle where we were staying. This event, which changed the English course of history in a very profound way, started in 1066 when William Duke of Normandy, sailed across the English Channel to defeat King Harold II and became William I of England. The town is steeped in history with it’s medieval streets and the Battle Abbey which was completed by William in 1095 to commemorate the battle and as an atonement to the Pope for the war. The Battle Abbey location is also the place where Harold supposedly died after being struck by an arrow through one eye. Pretty gory stuff but extremely entertaining through the narrative of our wonderful tour guide and amateur historian, Michel. We also stopped for some refreshments at “The Nook” where I had a delicious hot chocolate, one of the best on this trip. 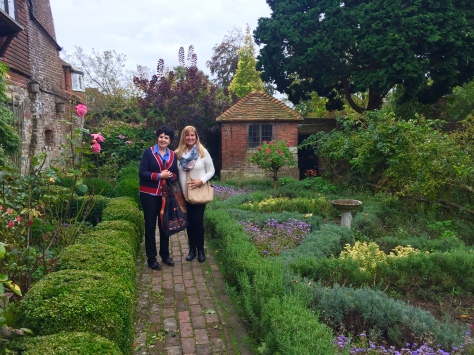 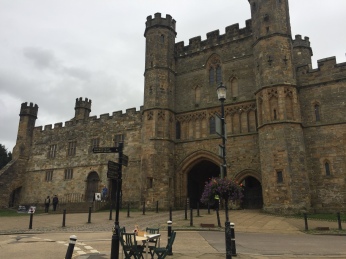 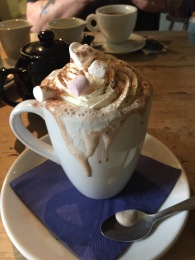 The next day we woke to bright blue skies and set off to explore the beautiful white cliffs of East Sussex. On the way we stopped at the Pevensey Castle Monument. The castle, which is in the care of English Heritage Society, dates back to Roman times and was reoccupied in 1066 by the Normans during the conquest. It also served as a garrison during WWII. We had time to stroll along the perimeters and take in the ancient walls and battlements. 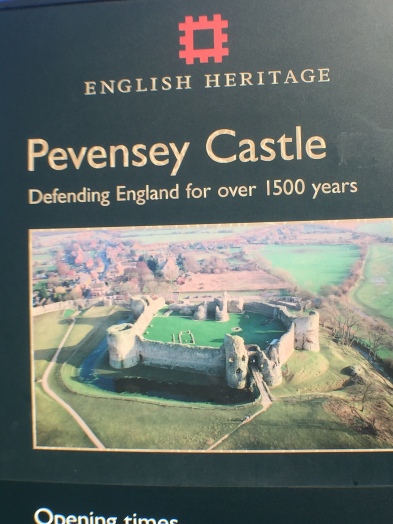 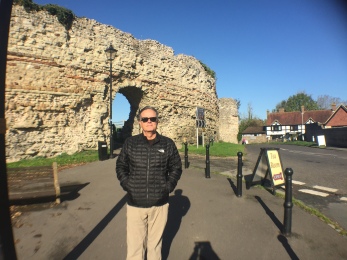 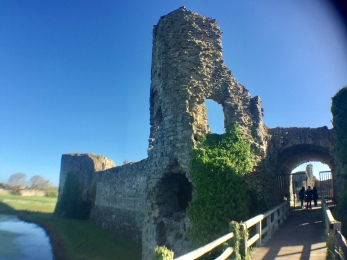 From Pevensey we drove on to Seaford where we took a hike to a hilltop for spectacular views of “The Seven Sisters”. These are white chalk cliffs located between the towns of Seaford and Eastbourne. The views along the top of the cliffs are simply breathtaking especially when there is not a cloud in the sky. We walked along the edge (but not too close) towards Beachy Head Lighthouse. At the lighthouse we were surprised to see a helicopter filming a WWII Spitfire vintage plane as it made acrobatic twist and turns over the English Channel, a truly unique experience. 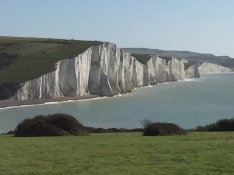 We continued exploring the area by visiting the town of Eastbourne and strolling the beautiful waterfront promenade. The pier with its golden domes and flower lined streets were delightful.

Then on to the town of Rye. This is a quaint medieval town with cobblestone streets and half timbered houses. It was delightful to walk the streets and admire the beautifully preserved buildings as well as the shops and art galleries. We stopped at the Mermaid Hotel for a drink, which I highly recommend. The hotel dates back to the 15th century with lots of period furnishings. You can just imagine ghosts walking the corridors at night. But we had some excellent whiskey at the bar which quickly chased any thoughts of ghosts away 😉 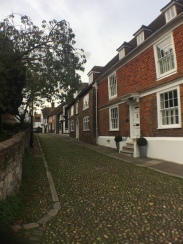 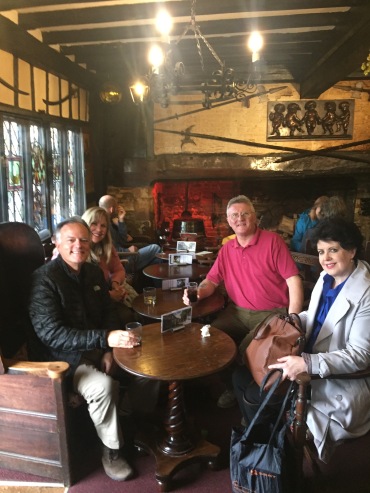 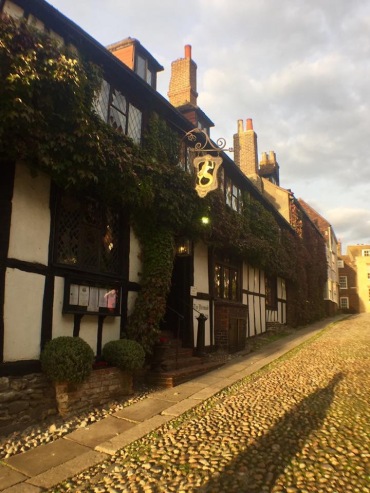 It is a treat to visit an area with locals and this was the case with our hosts Michel and Rosemary. Michel grew up in the town of Hastings so it was with great pride and excitement that he  gave us a tour of his town. This town known for the Battle of Hasting 1066 (fought in a field where the Town of Battle now is) faces the English Channel. The Norman ruins of Hastings Castle, where William the Conqueror once lived, stands as a proud sentinel above the old town. We enjoyed a full day in this town, starting with a walk through the town center to see the “Birthplace of Television” which was a very surprising discovery. We took the Westhill underground Railway down to the old town. Here we walked along George street and High street to visit shops (a lot of nice things to buy) and admire the reconstructed pier (the original burned down) along the promenade. If you are visiting this town bring your walking shoes because there’s a lot to see and we covered a lot of it with Michel and Rosemary, they are great walkers!

The day could not have been more perfect and we ended it high on top of West Hill where we had a whiskey overlooking the old town. 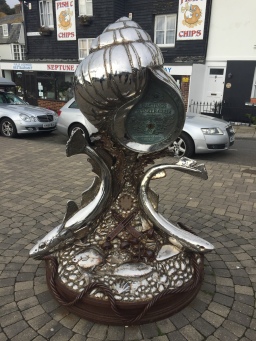 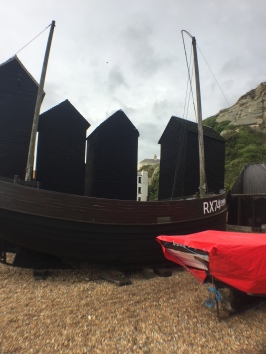 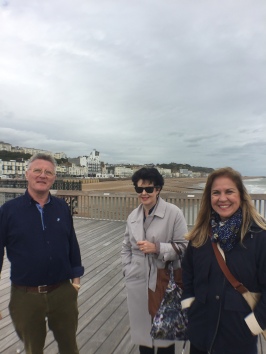 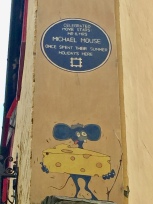 This day was truly memorable but made even more so by a delicious dinner at the Beauport Park Hotel. This hotel has a very special meaning to our friends Michel and Rosemary because this is where they were married. We are very thankful that they shared this very special place with us. And the food was fabulous. 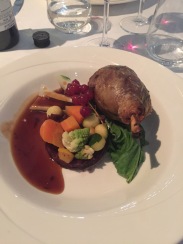 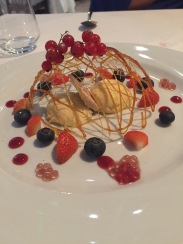 Time flies when you’re having fun and the time went very fast indeed. So it was sad to leave the area and check out of our hotel. But our friends had one more treat for us before taking us to the train station back to London.

We stopped to visit Bodiam Castle. This is a 14th century moated medieval castle that brings to mind knights in shining  armor and everything that goes along with it. We took a million pictures but I’ll just share a few. What a beautiful place and what a lovely way to end our visit to the area. Thank you Michel and Rosemary, we will never forget it. 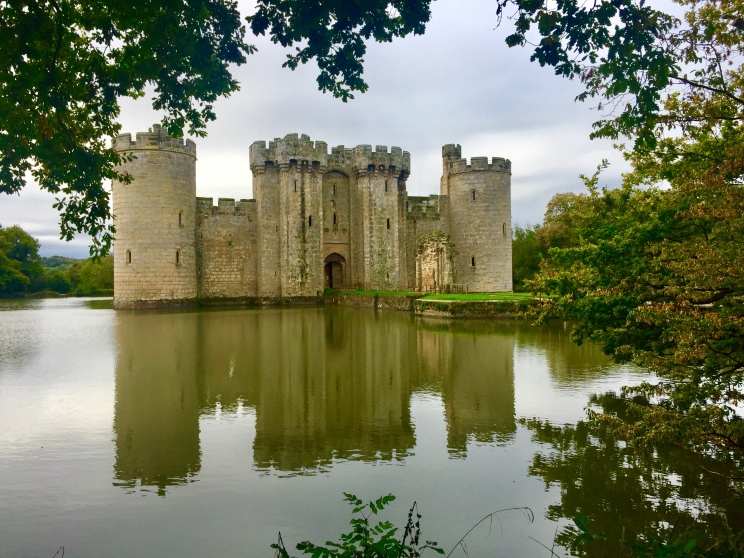 One thought on “Hastings and Battle, England”