We really didn’t appreciate the vastness and uniqueness of this park until we drove into the visitor center and realized that there was another 20 miles of mostly uphill switchback roads ahead of us, reaching an elevation of over 8000 feet just to get to the ranger office where most of the hikes and dwellings are located.

Tours for the different dwellings can be booked at the visitor center for same day or next day only, no online bookings, so we were really happy to be able to get same day tour of the Cliff Palace dwellings. These tours are booked quickly, so if you are thinking of visiting Mesa Verde get there early. We got there at 8:30am and the first available tour was at 1pm so we had time to enjoy the park before our tour.

With all that time available (or so we thought) we decided to drive along the Champin Mesa road towards Spruce Tree House and the Mesa top loop. That is about a 40 minute drive during which, you can stop at different overlooks for breathtaking views of the Montezuma Valley.

When we finally got to the park ranger office, they suggested that we hike the Petroglyphs Point loop trail, which takes you by a beautiful (but unfortunately for us closed due to rock slides) Spruce tree house dwelling. This dwelling is one of the best preserved cliff dwellings that you can see on your own via a very steep and winding paved road. We decided to take the ranger’s advice and do the Petroglyphs Point trail, supposedly a “somewhat strenuous but very doable” 2.5 mile loop trail that became quite an adventure.

The trail is very scenic as it takes you through a wildlife habitat where you literally hike the edge of a Mesa, and along the way get treated to elevation changes of about 800 feet (both up and down). That doesn’t seem that much of a big a big deal but when you are already at 8000 feet, 1600 feet swings, as you are crawling over boulders and tight passages, quickly makes your body exclaim “hey what the hell is going on”. It seemed to me that I was  going up all the time and sometimes right at the edge of the cliffs. I would say this is a moderate to advanced trail with uneven stone steps and rocky ground, and tight passages. We walked for over an hour and found a hiker that suggested we return the same way we came once we reached the Petroglyphs because the road on the tail end of the loop was not very well marked. Her actual words “the trail gets kind of sketchy beyond the Petroglyphs and you can easily get lost”. 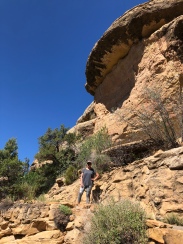 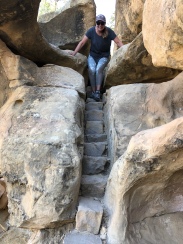 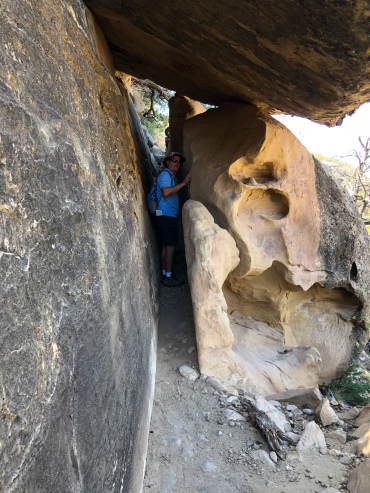 We found the Petroglyphs which are beautifully preserved, but didn’t have enough time to linger (remember how I thought we had plenty of time) we had to rush back through the trail in order to make our 1pm tour, needless to say I was exhausted by the time we finished this hike and had a whole 1/2 hour to relax, rest and eat something before our next hike with the ranger. 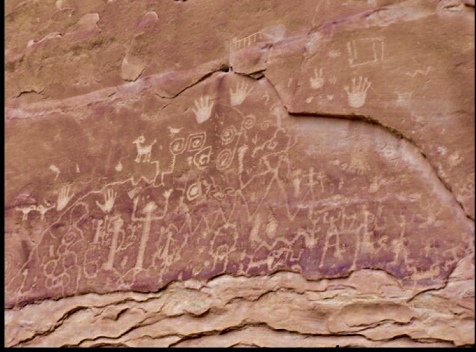 The Cliff Palace tour takes about an hour and meets at an overlook which gives you a great view of the dwellings. One nice thing about most National Parks we have visited is the great accessibility for all types of visitors. The National Park system really makes an effort to accommodate visitors of all ages and physical capability so that everyone can enjoy these sites. Our tour guide told us we would be going down some steep steps and up three sets of ladders but at this point I was ready for anything.

We stopped midway before we entered the dwelling for a brief discussion on the life conditions and customs of the ancestral Pueblo people that lived here. The term Pueblo is used to describe twenty one different regional people which have now mostly settled in Arizona and New Mexico. The Pueblo people of this particular Mesa location were the Anazasi people. They settled here between 300 and 1,300 A.D. They were dry farmers on top of the Mesa and they cultivated corn, beans, yucca, etc. They were also great traders and archeologist have found such rare items such as seashells and chocolate at this site, clearly their trading routes extended to very far regions. 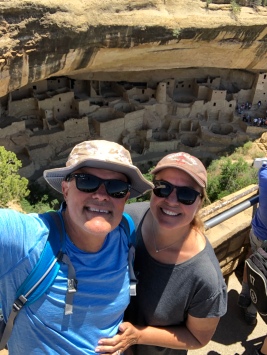 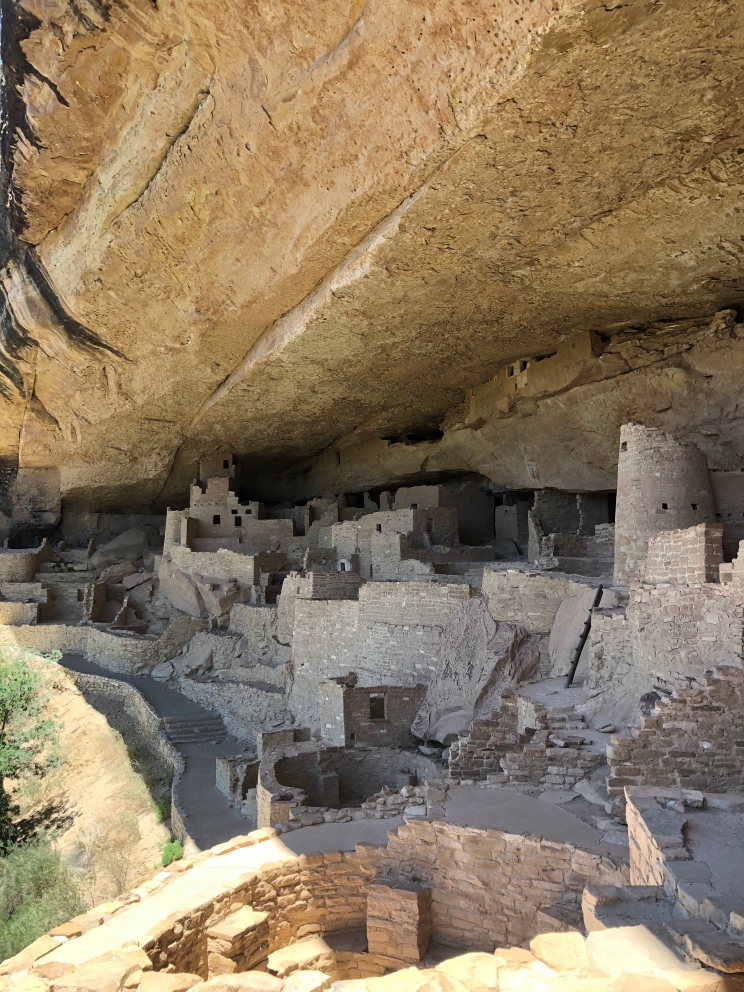 The site is mostly stone dwellings some of which were four stories high. They used the natural depressions of alcoves found in the cliffs and built their dwellings right beneath them. They didn’t have use of the wheel or any metal so their tools were stone, wood and animal bones, which makes it even more impressive when you see the precise architectural details of these dwellings. I would give this tour an A+ it had everything from historical perspective to adventures in climbing stairs up a sheer cliff, lots of fun for all 😄 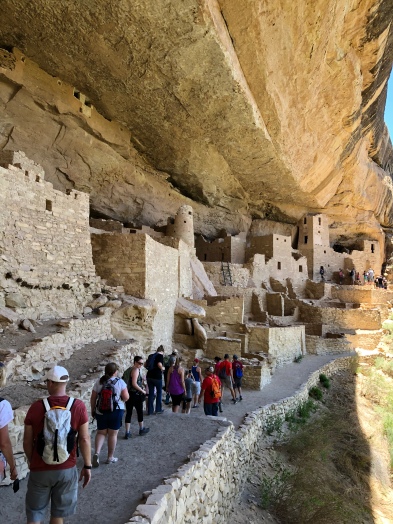 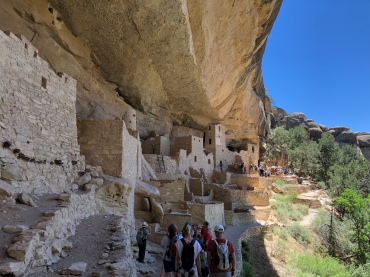 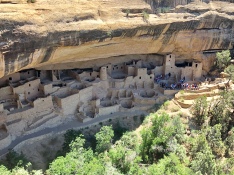 This park is vast enough that a one day visit may not be enough, so we came back a second day to drive to the Wetherill Mesa which is an area of the park that only 10% of park visitors visit. I can see why this would be the case, the drive takes you on 12 mile road that is only open from late May to early September (this alone should make one pause and think “why”). The entire road is one giant set of switchbacks, both up and down, in and out of hills and around canyons making for some awesome views and a white knuckle ride. Leo enjoyed driving our Jeep through these roads, of course he’s always up for a challenge. We brought our bikes this time for a nice easy ride at the top of the Mesa on the Long House Loop paved trail. This trail is about 5 miles and it takes you on the top of the Mesa from which you can clearly see the Long House. I stayed on the paved trail, but Leo took the opportunity to go off-road for an additional 2 mile trail that took him to the very edge of the cliffs and to the Nordenskiold Site. You can also see wild horses which roam this area. We were told not to approach them as they are not friendly. Overall it was a wonderful experience to ride our bikes and be part of this wonderful enchanted place. 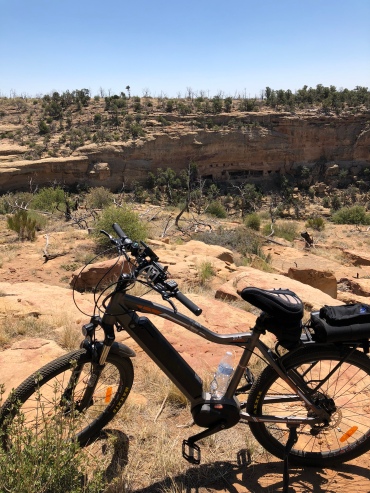 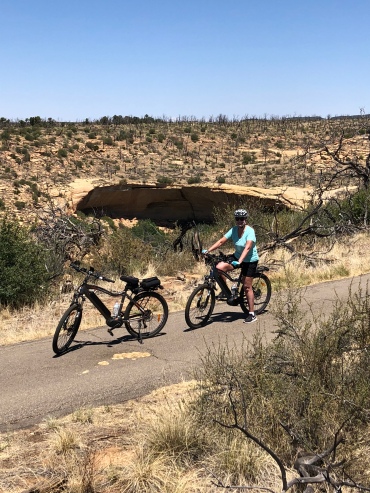 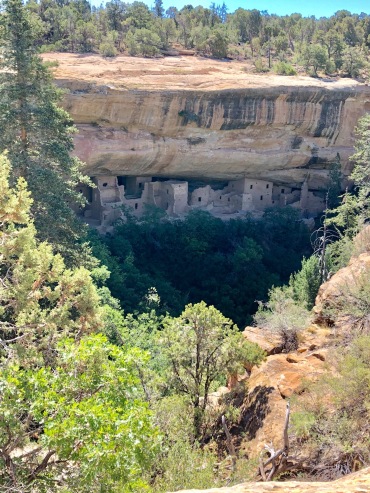 What a beautiful place this is and coupled with the history of the people that lived here makes it for one of the most unique parks we have been to.