When you embark on a cross country RV trip, you have two choices. You can try to get to your destination by the quickest route possible or you can take it slow with quirky stops along the way. I have discovered that quirky and slow is the most fun. With this in mind we had our eye on Tombstone, Arizona and this layover did not disappoint.

There were several campgrounds in Tombstone but according to online reviews (which we depend heavily on) they were dusty and packed tight, exactly what we stay away from. The reviews led us to make reservations at Tombstone Territories RV Resort about 8 miles outside of Tombstone and literally in the middle of the desert. What a wonderful find this campground was, with long and spacious sites (their motto is “no rig is too big”). The resort offered indoor heated swimming pool, hiking trails, amazing desert sunsets and star filled nights, they did not disappoint. We were enchanted and it will be a place we would certainly stop again if traveling the Arizona I10 corridor.

I have to mention the weather, since leaving North Carolina it has been almost 3 weeks since we have seen the sun. At arrival it was sunny and 72 degrees. Leo and I were in heaven and immediately enjoyed a bit of hiking around the campground to stretch our road weary legs. The next day was even warmer for our planned tour of Tombstone. How nice to don a tee shirt and Capri pants. 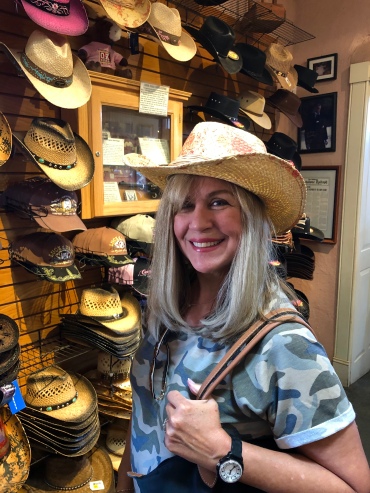 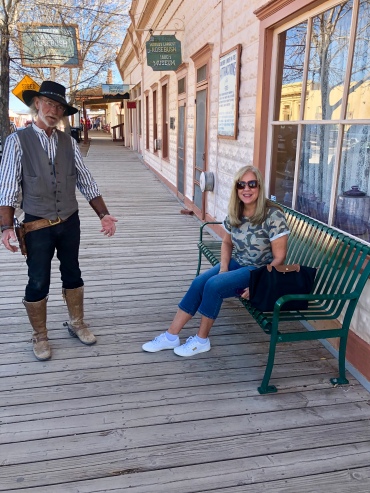 With all these sunny thoughts we made a stop at the visitors center in Tombstone to get our bearings and plan our day. Let me just say that at first look it was just a cute one main street cowboy town and I thought we wouldn’t have much to do there but we ended up spending a good long day. The lady at the visitor center gave us very good recommendations and we followed her suggestions to a certain extent, we skipped the tour of the mine I’m not interested in dark cramped spaces. Our first stop was the Courthouse Historic Park which is a beautiful Victorian building, built in 1882. The rooms inside this building have been converted into an exhibit that chronicles the origins and colorful history of this mining town. There was a very detailed history of Geronimo and the Indian wars against the town, the silver mining origins and the famous O.K Corral gunfight. They also have an outdoor courtyard complete with original hanging gallows as a reminder of the rough times these people lived in. Entry tickets to the courthouse was $7 per person and good for the day, so you can take your time and return if you don’t want to view it all at once (plus very clean bathrooms!) 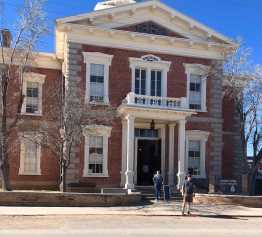 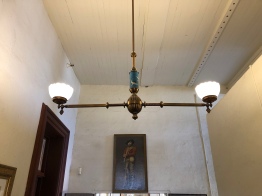 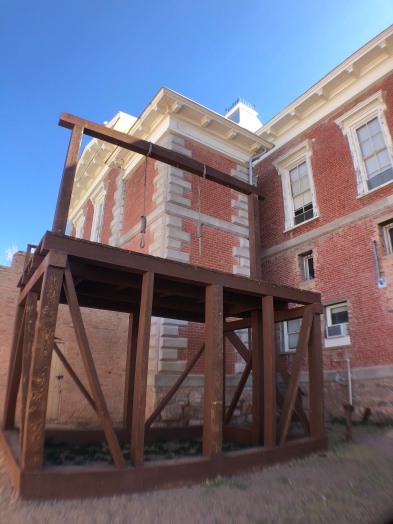 As we left the courthouse and walked towards Allen Street, we noticed four black clad gunslingers walking the dusty street just like in the movies. I thought one of them even resembled Val Kilmer. This was the signal that the “Gunfight at the O.K. Corral” re-enactment was about to begin. We hurried to buy tickets and catch the 11am show. You can explore the grounds and the stables before the show and then sit back and relax at an outdoor theatre to relive the famous gunfight. Very touristy but you can’t go to Tombstone and not see the gunfight, it would be like going to Paris and not seeing the Eiffel Tower, (OK a bit of stretch for comparison!) 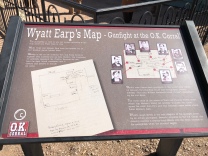 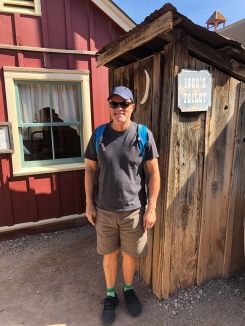 The gunfight took place on October 26, 1881, in an 18 foot lot behind the O.K. Corral and next to Fly’s boarding house where Doc Holliday had rented rooms. The Earp brothers Wyatt, Virgil and Morgan along with Holliday were the the facto law of the town and had a long standing feud for control of Tombstone with a gang of ruffians , the McLaury and the Clanton brothers. After months of threats, stage robberies, arrests and pistol whippings the inevitable fight came to a head on that fateful day in October, with the battle lasting all of 30 seconds. All the outlaws were killed, Virgil and Morgan Earp were seriously wounded but Holliday sustained a minor injury and Wyatt Earp walked away untouched. The re-enactments were very entertaining and they kept it as lighthearted as possible but beware it is loud as they use real guns, so if you don’t like gunfire noise cover your ears and that goes for children in the audience. 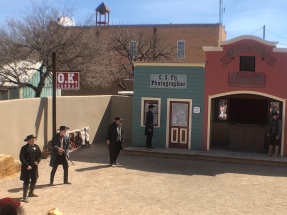 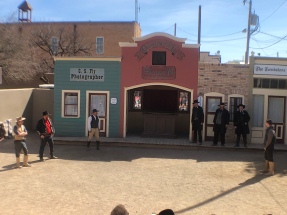 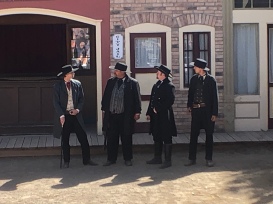 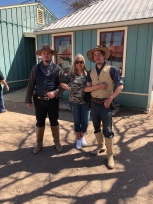 When they were not busy killing each other they had plenty to do, saloons aplenty in this town, the most famous one being The Birdcage Theatre. This establishment was a multifunctional place as it was used as saloon, musical theatre and house of prostitution (prostitution was legal and taxed). This place is also featured in the movie Tombstone but in real life, the Birdcage looks a lot smaller. The building is well preserved and well worth the price of admission. The stage and audience sitting area as well as the balcony booths (were the well to do could reserve a box to see the show and a prostitute to spend the night with all for $25) are as they were in the 1880’s with all of the original lighting and furnishings. You can also go backstage where they have interesting posters of famous acts that toured this area of the west. Downstairs you can see the gambling tables as they would have looks complete with shady card dealers and money sprawled on the tables. Gambling was a major pastime, Wyatt Earp was not only a lawman but also a famous gambler. 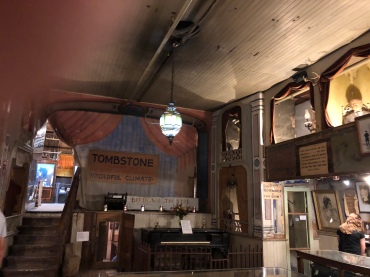 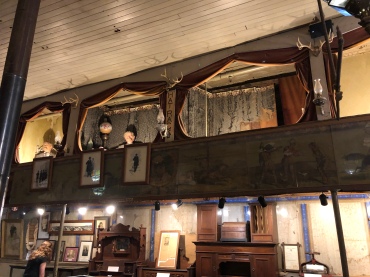 After all this touring we decided to head for one of the saloons to enjoy some music and lunch. Lines were already forming everywhere but we were able to secure a seat at the bar at Big Nose Kate’s saloon. Turns out big nose Kate, born in Budapest, was a famous prostitute and longtime companion of Doc Holliday. Today her establishment has some great margaritas, beers and burgers. You can even even get a veggie burger ( I’m sure Doc Holliday never saw that one coming). I went for the real thing and enjoyed it immensely while listening to some great country music. Afterwards we shopped some of the local art stores and Leo found a beautiful Apache Kashina which he bought for his collection.

We finished our day with a dip in the pool back at our campground. What a lovely time we had here, Wild West history along with rest and relaxation. Tomorrow we are back on the road with our next stop being Palm Springs, California where we will be for the next two weeks. I’m looking forward to a longish stay in this Southern California desert mecca. Stay tuned for our next adventures.