We always try to find interesting stopping points along our route. This time we picked Albuquerque, which we had visited as a day trip, when we stayed on previous trips in Santa Fe. Albuquerque is also a convenient stopping point on I40 as we head home. The city is in close proximity to Trinity Site, which I’ll explain more fully later and it is one of those places that Leo has always wanted to visit. I think Trinity Site was in fact his main goal on this trip, and luckily for me our stopping point in Albuquerque proved to be delightful.

Albuquerque was founded in 1706 by Mexico Governor Francisco Cuervo y Valdés and to this day it is true to the original plan with streets radiating from the central plaza. The area called Old-town is about ten blocks of historic Adobe buildings, shops, galleries, restaurants, etc. The plaza is anchored by the beautiful church San Felipe de Neri. Also near by are the city’s  art and history museums. You can find free parking along the streets near the museums and walk along the quaint streets. 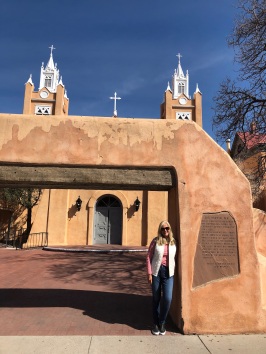 We spent a great afternoon doing some shopping and eating, my favorite things to do. The art museum was small but had a nice permanent collection of regional artists. We also found that the local art galleries had very reasonable prices and we purchased two beautiful Acoma pots that will be added to our collection. The one striking feature of Old-town are the colors. Everywhere you look colors pop out from buildings to flowers to banners. I love the colors of the American Southwest which of course have their root in Mexican culture. 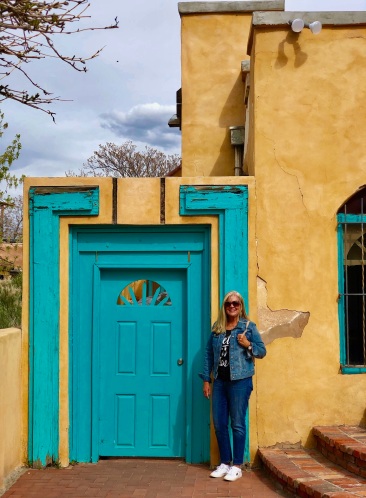 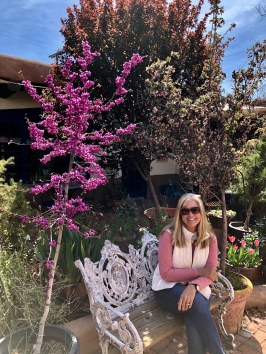 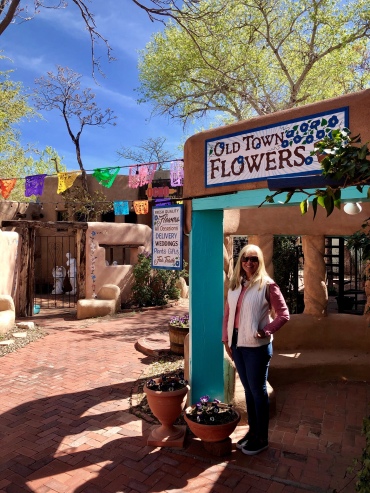 You also see the Mexican influence in the local food. There is great New Mexican cuisine to be found here, we were very happy to try some at Church Street Cafe  and Cocina Azul.  There are also some fine breweries and we found ourselves sampling some interesting beers at La Cumbre Brewing Co , Red Door Brewing and Marble Brewery , they take their beer seriously in this town. The one other thing they take really serious, is beef jerky and after seeing  Mike’s Jerky featured on the “Food Channel”, we just had to stop in a check it out. They have a large selection of flavors and give you samples of anything you want. Needless to say, Leo had a fun time sampling and selecting  some unique flavors. Some of the ones he picked are way too spicy for my taste,  but the teriyaki flavored jerky is delicious. I know we will be mail ordering these since they are atypical of normal beef jerky in that they are wafer thin almost like a potato chip….. yummy! 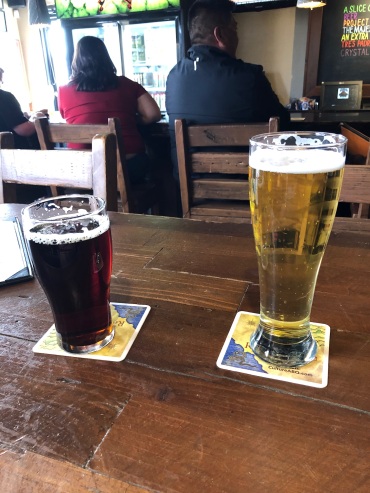 After all that eating and drinking we needed to get out and walk and this area has many wonderful trails for that purpose. We decided to visit the Petroglyphs National Monument because both Leo and I are fascinated by ancient cultures and pictorial symbols. This park is large, about 17 miles of dormant fissure volcanoes provided ancient cultures a wonderful black rock canvas which resulted  in more than 24,000 Petroglyphs carved by the ancestral Pueblo people, and some by early Spanish settlers. Most are still intact and preserved in the black rocks and can be easily seen along the trails. We took the Rinconada trail for an easy 2.5 mile loop hike.  Along this hike you can see some interesting figures carved into the stones. Some are recognizable with animal figures. 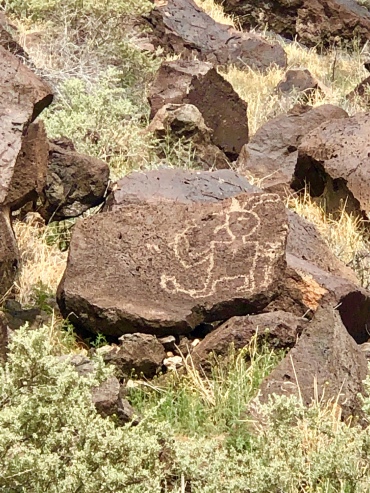 Some are a bit more mysterious depicting what seemed like deities with headdress.

Others were even more puzzling as it looked to us like a man kneeling in front of an extraterrestrial being.  We let our imagination run wild, but look, you decide. 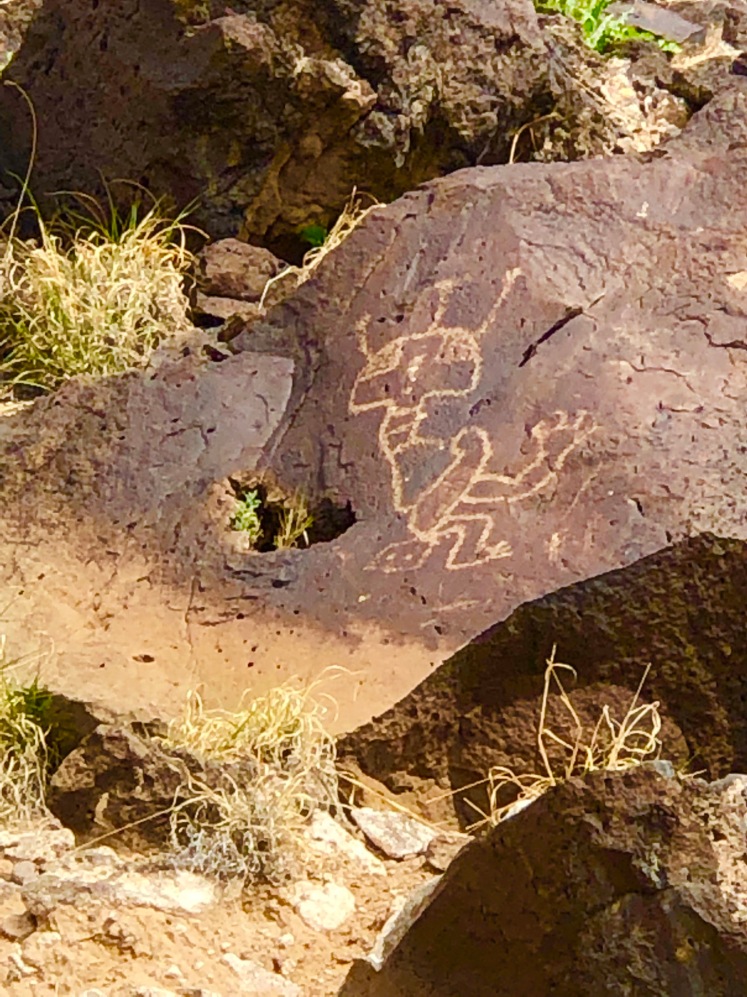 Another interesting and fun trail is the Boca Negra Canyon. This trail is short but uphill and a bit of mountain climbing, you can see fabulous Petroglyphs along the climb. When you reach the top, you are about one mile above sea level with great views of the Sandia Mountains and the Rio Grande valley. It was a bit strange to look down where new neighborhoods are popping up, adjacent to this ancient site,  and see car and trucks moving about while standing on what to the Pueblo people was considered sacred ground.

And now for our visit to the Trinity site which I feel was Leo’s entire purpose for this trip. This is where the first atomic bomb was exploded on July 16, 1945. This 51,000 acre area was declared a National Landmark in 1976 and it includes ground zero, where the bomb was detonated. Included in the National Monument is the Schmidt/ McDonald Ranch House, what was once a very remote country house, taken over by the US government during WWII and where the first plutonium core for the bomb was assembled (in what was once the farm house dining room). 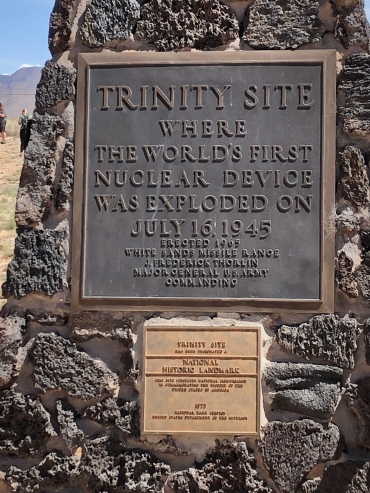 The site is inside the White Sands Missile Range, where most of America’s bombs, missiles, and other nasty things are tested and blown up. Because it is an active and very restricted army base, the site is only open to visitors for 6 hours on two separate days during the entire year. This year the first date was April 6 from 9am to 3pm and there will be another access available in October of this year. The drive from Albuquerque took 1 1/2 hours to what seemed to me the end of the world. Security was very tight and it took a while for our car to get through the checkpoint where they asked for IDs. After that we drove to near ground zero itself then hiked for about a half mile to where a marking in the shape of an obelisk marks the spot of detonation. 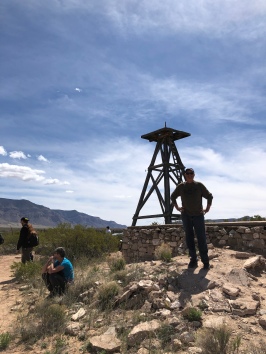 It is a very somber place and in a way we are glad to have seen it because it puts a very personal experience to what is man’s most destructive weapon, and truly makes you reflect on what could happen today in the hands of bad people.

We will leave you with happier thoughts. Enjoy!