This summer we planned a visit to New England with the motorhome and we decided on Lake George, New York as a stopping point on our way to Massachusetts, mainly because it was within driving distance of New York City and convenient for our daughter and son in law to join us for a weekend. Little did we know that this area is a destination in itself, with the beautiful lake and the many hiking trails, history and recreational activities available. It is always nice to be pleasantly surprised.

We arrived at the Lake George RV Park early enough to setup and relax. This is a very wooded park with some tricky turns for our sized rig but we managed, and our campsite was just lovely. This park is huge with walking trails, multiple swimming pools, pickle ball courts plus tennis and basketball. There is also a trolley that makes continuous runs to Lake George Village, very convenient, they have thought of everything. 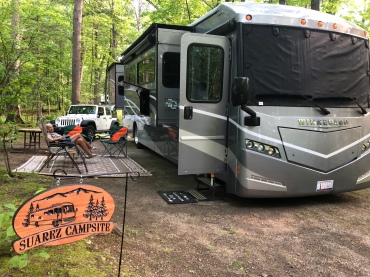 As I mentioned before our daughter and son in law, Alexandra and Michael joined us for the weekend which is a first for us as far as having people stay overnight in our RV. We managed very well and everyone was happy and comfortable. We welcomed them with a BBQ dinner and a beautiful mild night perfect for outdoor eating and a campfire with s’mores after the sun went down. Overall a delightful first night. It is a lot of fun to share our adventures and RV lifestyle with our kids. 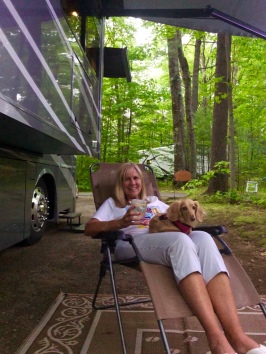 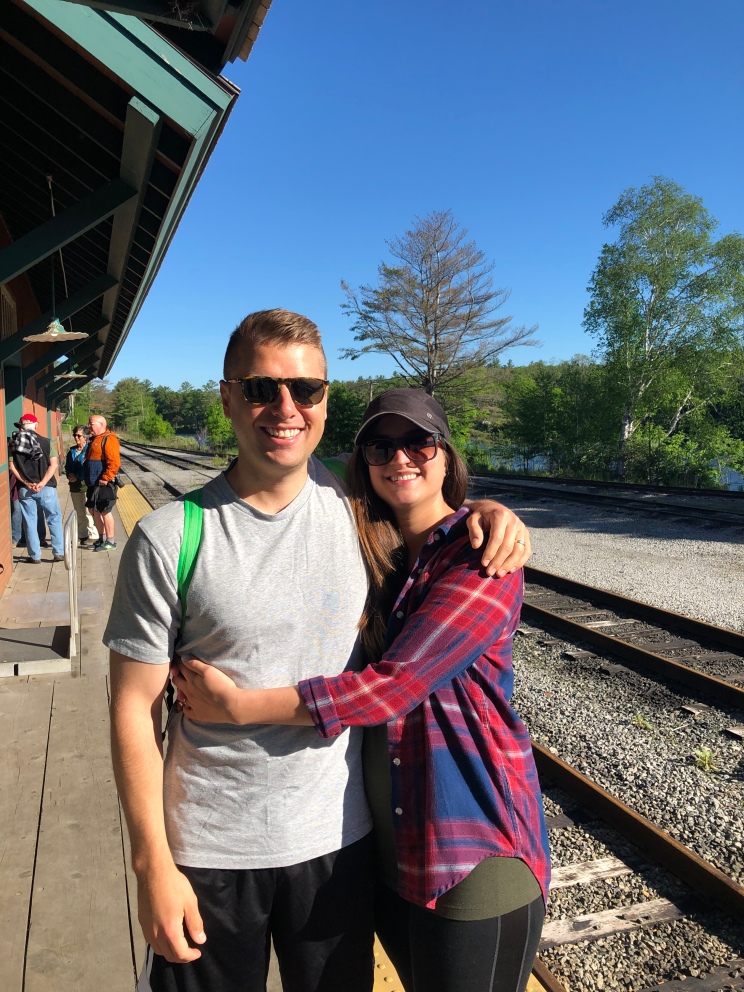 On our first full day with Alexandra and Michael we got up very early for a different type of bike ride. We made a reservation with Revolution Rail in North Creek, NY to railbike through the Adirondacks. These bikes run on an old railroad track that was decommissioned for trains in the late 1990’s and takes you on a scenic route through the forest banked by the Hudson River and finally crossing the river through a beautiful trestle bridge. Our tour started at 8:30 am and it was a bit chilly but very pretty that early in the day. When you reach the seven mile mark there is a nice place to get off the bikes for a bit of a rest. At that point the guides turn the bikes around using an ingenious turntable contraption and we headed back the way we came. We switched seats on our quad bike with Alexandra and Michael so everyone had a turn in the front seats which gave you a totally different view and perspective. This was a fun 2 hour tour that I highly recommend.

After the tour we headed to main street North Creek for a much appreciated breakfast at a popular dinner called Chrissy’s. North Creek is a tiny ski village with a pretty main street, and the breakfast by the way was delicious. The rest of our afternoon was devoted to pickle ball playing. Alexandra and Michael took right to the game and beat us! Beginner’s luck I say.

Sunday, their last day with us , started with a hardy breakfast cooked by Leo complete with mimosas. After breakfast we went to Lake George Village to walk the waterfront promenade, and visit some of the shops. The day was picture perfect with many people in the water (which I’m sure is ice cold) and thankfully the end of the Amaricade motorcycle tour rally. This is a yearly event on Lake George that brings thousands of motorcyclists to the village. We noticed them in our campground and the Lake George village streets were lined with motorcycles as far as the eye could see. They had concerts and exhibits which ended on Saturday so our promenade walk on Sunday was a bit more sedate. We ended the day at the Lake George Beach Club with some refreshing drinks and live music on their outdoor deck. Truly a delightful day with Alexandra and Michael, we were sad to see them go but enjoyed our time with them. 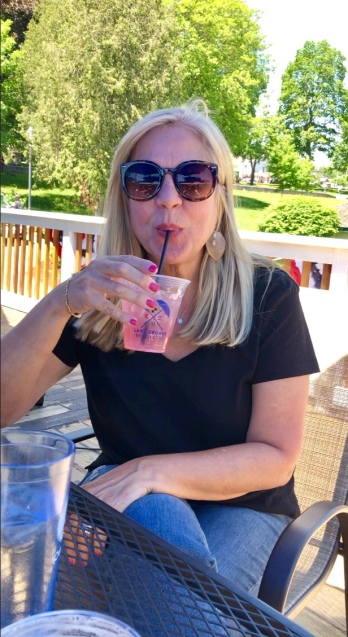 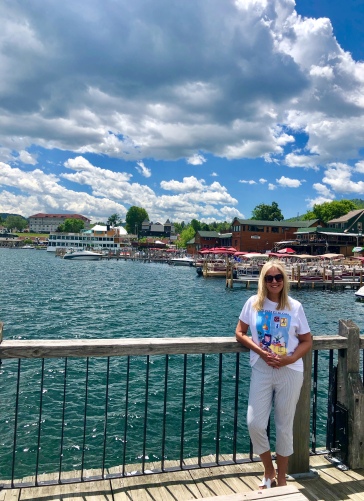 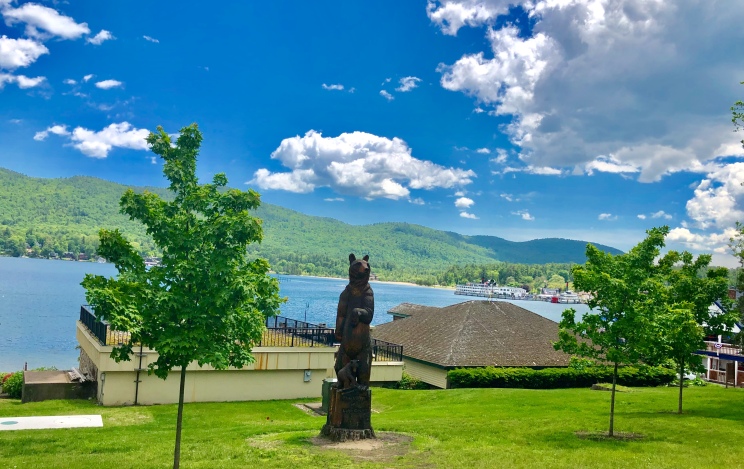 Hiking is a favorite activity both Leo and I enjoy and the Adirondacks has a lot of trails from which to pick from. The RV campground office gave us a nice list of hiking trails and we decided to try the Pilot Knob Preserve hike.

This trail is rated “moderate” but in fact is a pretty challenging uphill climb through a rocky path that at times can be slippery especially on the descent. We forgot our hiking poles and I wished I had them but nevertheless it was one of the most enjoyable hikes we have done this year. Half way through this 4.7 mile hike (round trip ) there is a gazebo for a much needed rest. This spot sits on a small bluff and is lovely with a scenic lookout and great views of Lake George. From the gazebo you continue another mile (but it felt longer) climb to a seasonal waterfall that had plenty of water and pretty enough to make the climb more than worth while.

The hike down was exhilarating as you are meandering through a hemlock and oak forest and trying to watch your step at the same time. It took us approximately 3 hours to complete this hike making it a very enjoyable morning. We would definitely do this hike again. 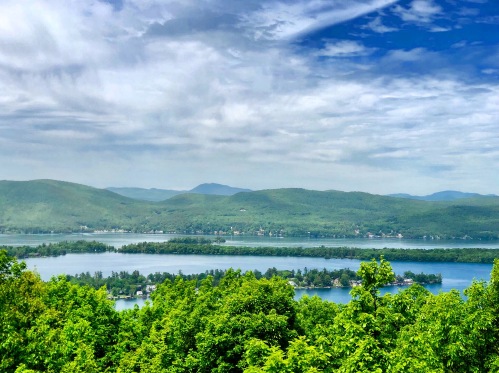 We are usually very good at pre planning our trips and researching the area but this trip was a bit more laid back so it was a thrill to discover that Fort William Henry   sits at the southern bank of Lake George right in the middle of the village. Naturally we set out the next day to visit this fort which was immortalized in the book and one of my favorite movies, The Last of the Mohicans. 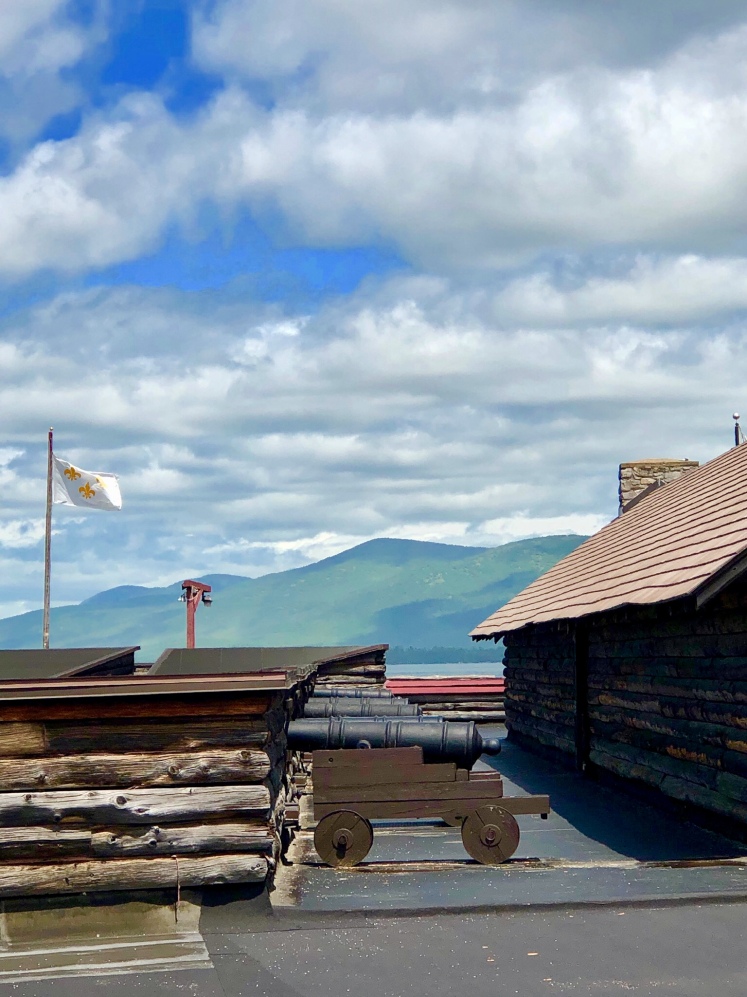 The fort was laid siege by the French and their allied Indian forces under the command of General Marquis de Montcalm on August, 1757. The fort commander, the English Lieutenant General George Monro, sent couriers to nearby Fort Edwards asking for reinforcements which never materialized and after six days of battle the English surrendered. The terms of surrender allowed the English troops to leave the fort with arms and even a cannon due to their “honorable defense” of the fort (minus their ammunition) with a pledge they would not fight the French for 18 months.

The Indian allies of the French were angered that the terms of the surrender robbed them of the spoils of war and they massacred the remaining British wounded and the women and children taking scalps and attacking the retreating English forces. These brutal acts, largely exaggerated by the press, became a battle cry for recruitment of English settlers against the Indians. Fort William Henry became a symbol of martyrdom. The fort was eventually burnt to the ground by the French and was reconstructed in 1953 by archeologists when artifacts where found at the bottom of the lake. The original fort was built by the English in 44 days in 1755 and the reconstruction in 1953 took 5 years, go figure. There is a daily tour of the fort, complete with firing of the cannons and muskets which was very informative and worth taking. 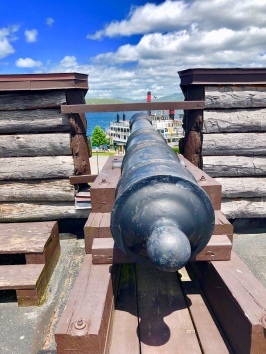 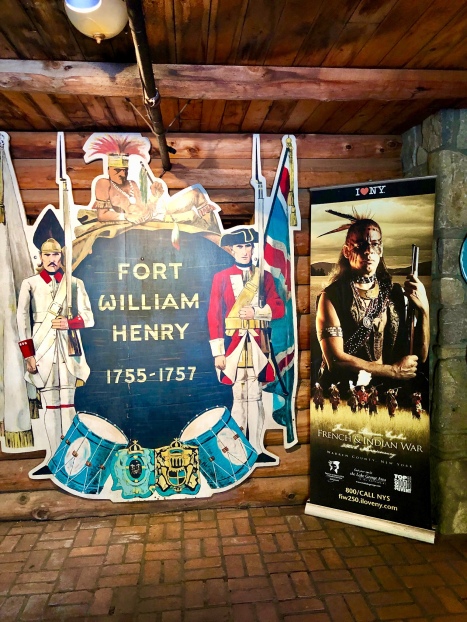 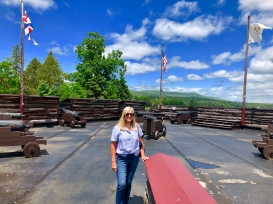 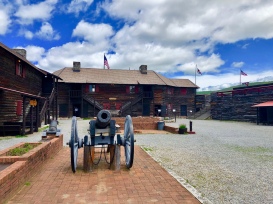 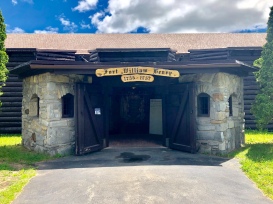 This area of New York evolved from wild frontier to the summer pleasure garden homes of the rich and famous at the turn of the 20th century. Just a 30 minute drive south of Lake George is the town of Saratoga Springs with its famous mineral springs and lakes which attracted tourists and became known for European style spa hotels for the ultra rich of the late 1800’s and early 1900’s. Some of these are still there displaying beautiful Victorian architecture. The entire town is teeming with beautiful old homes and some mansions of the rich and famous. 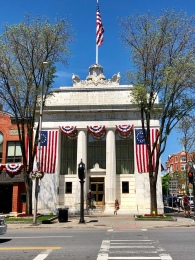 The city is known more today for the thoroughbred racing at the famous Saratoga Race Course. We noticed the race track as we entered town and the quaint Jockey Museum. We visited the Yaddo Gardens which was the country estate of financier Spencer Trask and his wife Katrina. They named the garden Yaddo affectionately for their daughter Christina as this was their nickname for her. The main home and some forty acres was bequeathed to the state for the establishment of a residency program for artists. The contribution to the arts is immeasurable as this center has opened their door to painters, sculptors, musicians, writers of Pulitzer Prize fame. 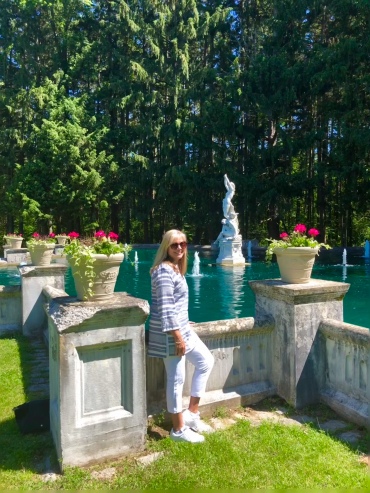 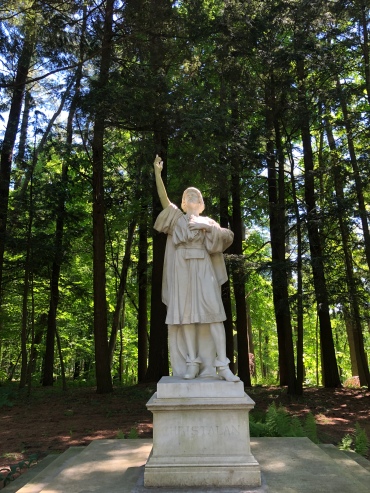 The gardens are free to the public and are a pleasure to stroll through especially on the gorgeous day we found ourselves in. There is a formal garden, a rock garden and a woodland area all meticulously developed to blend in and complement the more classical elements such as central fountain with marble steps and a balcony with a bronze sundial. The family meant this to be a “garden enclosed, a garden of delight, and a garden of romance” and they accomplished this goal. 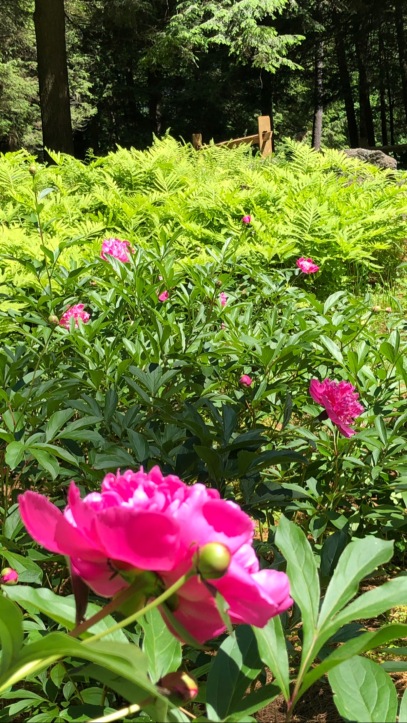 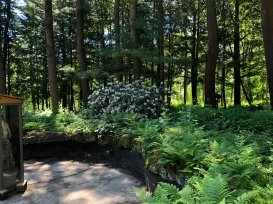 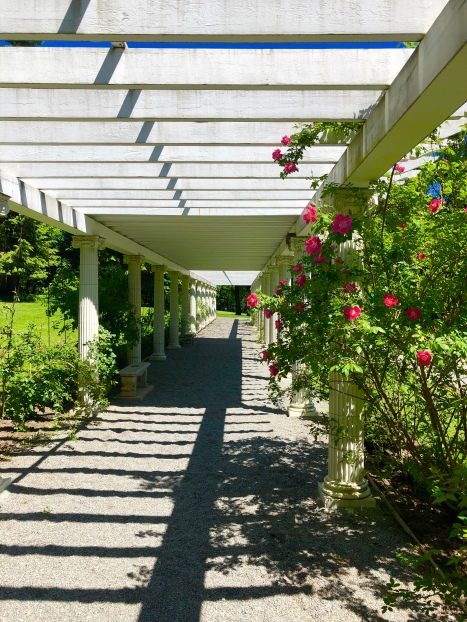 After we left Saratoga Springs we found out the potato chip was invented here. Turns out the restaurant Moon’s Lake House had a diner that was unsatisfied with the texture of the fried potatoes he ordered and sent them back to the kitchen multiple times. The chef, George Crum, became so annoyed that he sliced the potatoes much thinner than usual, covered them in salt and fried them….the rest is history!

We will return to this area there is so much to see here (plus try the potato chips) and close enough for us to get here with just one overnight stop. I love it when we find a gem and Lake George is one of these.

We will leave you with a video of our “ ride “