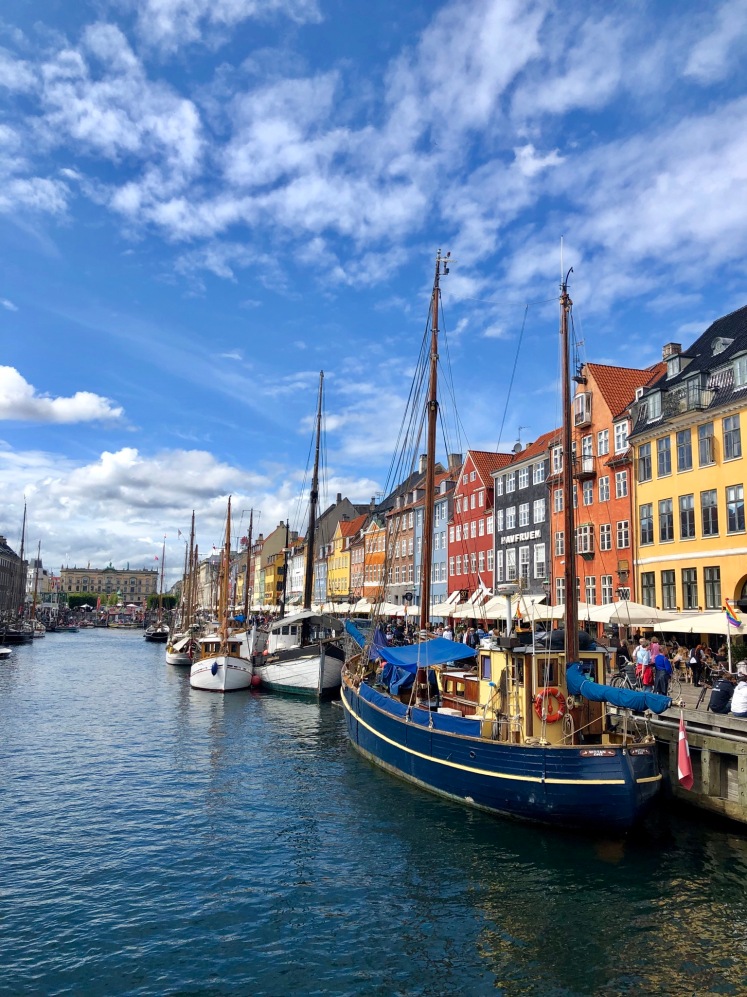 This is a continuation of our Vikings Homeland Cruise on the Viking ocean cruise ship, The Jupiter. I have been trying to break down the blog post by region to keep them manageable, but in my previous post on the Norway portion of the trip, I mistakenly included Aalborg which is in fact in Denmark. I have now removed it from that post and added here with Copenhagen, which makes more sense. So if you already read about the fabulous city of Aalborg on my initial Norway post, just scroll down to Copenhagen.

Our first port of call in Denmark was Aalborg. This Viking outpost was stablished in the late 900’s as a trading post. Our tour guide took us on a meandering walking tour of the historic center starting with the iconic Alborghus Castle, which was within site of our ship. This castle is a half-timbered structure built in 1539 as a fortification and is the present seat of the governor of Northern Jutland. There are dungeons a plenty and gory stories of witch burnings and ghosts still haunting the castle retold with relish by our tour guide. He was a great story teller and had us hanging on his every word. He even had us walk into a mock attack by a group of Vikings surprising our walking group, but in reality they were local artisans peddling their wears. We had a lot of fun with them and tasted some Aquavit which is a strong aperitif infused with herbs and spices.

Next we visited the Jen’s Bangs’s house which is the best preserved Renaissance architecture in all of Denmark and still privately owned. Built in 1624 this is a landmark complete with gargoyles and a sculpture of Bang’s face, tongue sticking out.

To my delight there is an artist district where beautiful old homes line the streets and the art galleries just seem to be part of the neighborhood. We visited a unique potters garden where a whimsical archway is said to be a good luck charm if you are able to pass through it without disturbing the hanging figurines.

Loved this beautiful city where we stopped to hear the church bells from Budolfi church and admired the picturesque plazas where people enjoyed the outdoor cafes and restaurants. 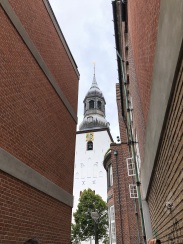 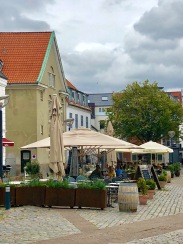 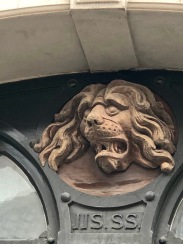 Part of the appeal of a cruise is the sense of getting away from the real world, and so I found it just charming to start our walking tour of our next destination, Copenhagen, with a fairytale. Our ship was docked in central Copenhagen near the Langelinie park and promenade where the Little Mermaid statue sits in the rocks by the waterside. I love walking tours so I was very excited about walking towards this iconic statue I’ve seen millions of times in pictures and videos. The story by Han Christian Andersen is well known where a mermaid is longing to become human. I never really understood why she would want to leave her peaceful home to dwell above with us, it’s kind of joining the rat race in my opinion. But anyways it makes for a wonderful story and who am I to judge. When we arrived at the site, the rat race was in full display by the mobs of people trying to take a picture of themselves in front of the statue (I also clawed my way to the front to do just that!) some risking a nasty fall by climbing unto the slick rocks to get a better picture. I didn’t go that far so I sent Leo to do it instead! The statue itself was much smaller than I had anticipated and I can only imagine that the small bronze statue, devoid of the mobs of tourists, would be a very peaceful site to contemplate. We didn’t stay too long but returned at the end of the day on our way back to the ship for one last look and found it much less crowded (a good tip for first time viewers…go late in the day). She looks a bit sad to me in her half fish, half human state.

We continued on our tour through the old battlement gates of the Kastellet (citadel). This fortress is in the shape of a pentagon with a ring of ramparts that used to encircle the city. It was started in 1626 to guard the port from attacks from the Swiss and the Dutch in the 1600’s and in the 1800’s it was used against the UK in the battle of Copenhagen. During WWII the Germans captured this citadel without resistance during their invasion of Denmark. It is a beautiful place to stroll with gardens and ponds filled with fish and many birds to be also seen. We walked past the beautiful St. Alban’s Anglican Church which today is just called the English Church, they have a statue of Winston Churchill in the church yard, smoking one of his famous cigars. 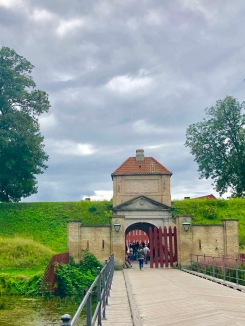 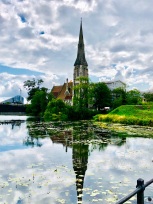 From the church you have access to the Gefion Fountain. This monument was donated to the city of Copenhagen by Carlsberg on the 50th year anniversary of the brewery. The fountain tells the mythical story of the creation of the island of Zealand where Copenhagen is located. The goddess Gefjon drives a group of four bulls, who turn out were her sons. She did this because she was promised she could keep all the land she could plow in 24 hours. So naturally she turned her sons into massive bulls and went at it. She plowed enough to create Zealand and the rest is history. The monumental size of the female driver and the musculature of the bulls is impressive and enhanced by the flowing blue waters. It is truly a beautiful sight. 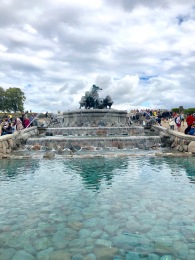 We continued our walk past the opera house and the museum of Art and arrived at Amaleinborg Palace just in time for a changing of the guard. This palace is the home of the Danish Royal family and it is a large square with four identical palaces around it. In the center of the square is an equestrian statue of king Fredrick V, the founder of this palace. We meant to return for an interior view of the public rooms but didn’t have enough time, there is just too much to see and do this city. One day is not enough. 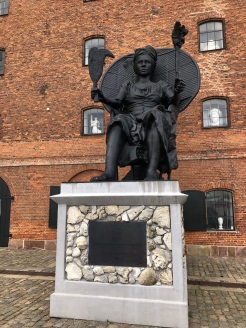 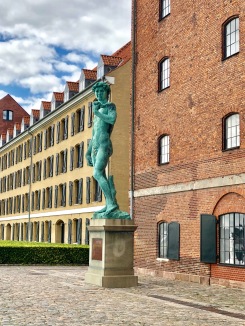 At this point we had walked a good bit and our tour guide thought it would be a good idea to stop and do some deep breathing, stretching and pressure point self massages. No I’m not kidding, he was just fabulous and was well versed in Asian zen arts, as he was of Asian descent. We absolutely loved this change of pace and I felt reenergized to continue. He gave us tips of how to find relief for headaches and sore necks by applying pressure in different parts of the head, just fantastic.

After our zen like exercises we continued our walking tour and approached the Nyhavn. My first impression was that it looked like Amsterdam.
This canal section of the city was built in the 17th century by King Christian V, who used Swedish prisoners of war to dig it out. The canal was used to transfer cargo from merchant ships from the harbor to the city center. Hans Christian Andersen made his home in this area of town for over 19 years. It was an area notorious for sailors and rowdy behavior of all kind. Today it is a tourist destination lined with colorful old wooden buildings, shops and restaurants. This was the perfect place for us to leave the tour and continue on our own. We spent a good deal of time relaxing with a beer within view of the canal and then doing some shopping along the way before finally catching a Viking shuttle in the city center back to the ship. 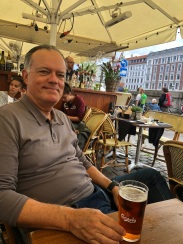 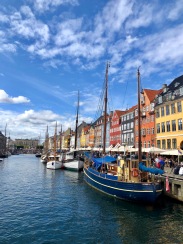 We had a lovely time in this gorgeous city and will return some day to spend more time and explore the country side. Tonight we sail to Berlin, stay tuned for our next adventures.