To quote Calvin Coolidge “a weird and scenic landscape peculiar to itself” I couldn’t agree more. We planned a few days to see Craters of the Moon National Monument and Preserve, the town of Ketchum and some of the region’s famous hot springs. We had a pretty easy flat but very windy drive from Boise. As we approached the park area we started to see the weird and moonscape type topography that has been created by a giant and moving hot caldera that has been shaping this region for about 10 million years. 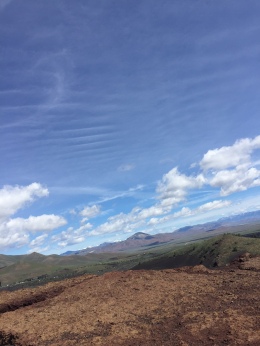 Our campground was about 18 miles from the park’s visitor center in the bustling town of Arco. Ok is not so bustling and if you blink you run the risk of missing it since there isn’t a single traffic light,  but our campground was in the center of it all (Main street) and with a pretty nice view of the mountains so overall a great place to stay. By the way, Arco is also famous because it was the first city that was electrified using nuclear energy (for one whole hour!) in the early 1950’s.

Since I mentioned how flat our drive was, I’ll just explain that this is the only flat area of Idaho (even though it’s still over 5,000 ft of altitude) and all of this due to the moving hot spot that is drifting and now located at Yellowstone National Park. This hot spot, scientists predict, will cause in another 200,000 years an explosion that will wipe out Yellowstone and cause a new Caldera to develop someplace else. Mother Nature’s way of paying it forward and moving it down the road in a way only volcanoes and lava can do. We were lucky to be here when the wild flowers started to bloom and with a beautiful blue sky the colors of the flowers made for a stark contrast with the black volcanic rocks.

All this makes for a very unusual park at Craters of the Moon. You can drive or ride your bike to different viewing points with each offering different views of caves, lava plumes, lava tubes, and all sorts of other weird things that only lava can create. Each stop requires a hike from the parking area some being short and steep and others a bit longer but mostly paved from the trail heads. We did a couple of hikes that took us to caves and tunnels and of course Leo could not resist all of the warning signs so he scrambled to most of these and I followed along. So glad I did! It was a really neat experience. 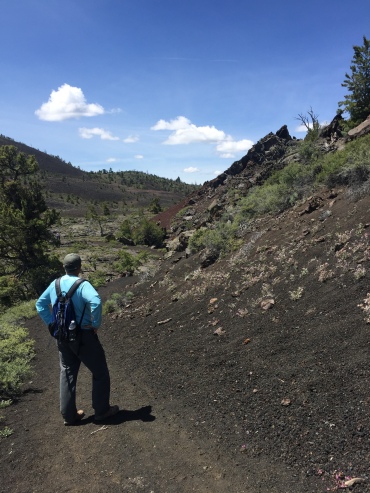 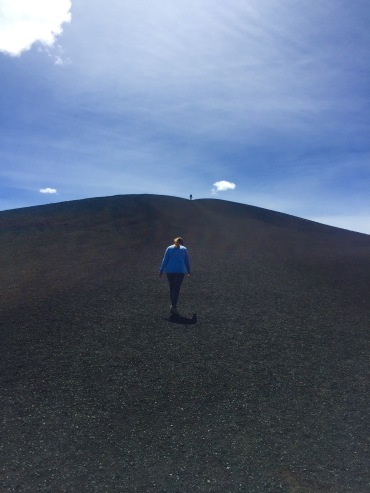 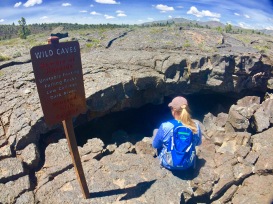 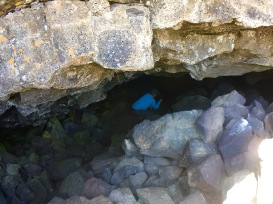 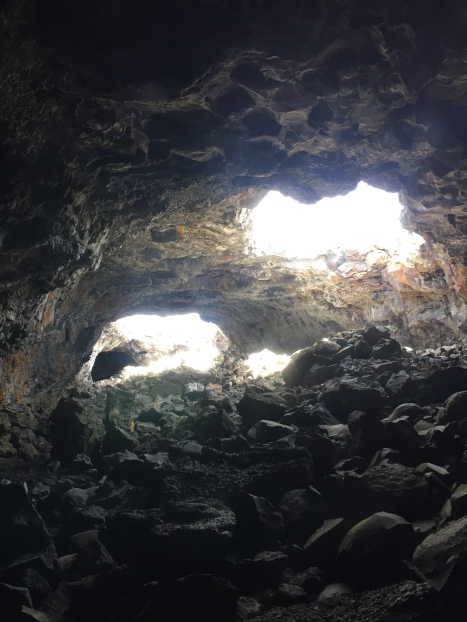 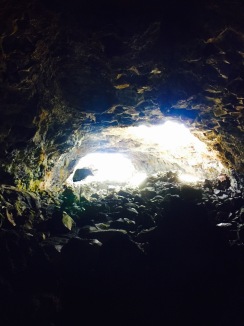 Sunday, Father’s Day, we took a drive (1 1/2 hours) to Ketchum and Sun Valley area. What a lovely town it is, very upscale with nice art galleries and shops. Most of the galleries were closed on Sunday but it was still great to walk and window shop. We were in a mood for a burger on Leo’s part and fish and chips for me, and we found both to our delight at the Sawtooth Brewery.  They had a large selection of beers but we ordered their Public House Ale which had a wonderful citrus almost grapefruit aftertaste that we really enjoyed it, and the food was first rate. The day was picture perfect and we finished it with scrumptious ice cream in the town square. It doesn’t get better than this.

Leo and I are both planners and we have done a lot of reaseach for this trip but what to do when we found ourselves with an “extra unplanned day” in Idaho?! We don’t panic, we look at it as an opportunity for adventure and discovery. So after googling “day trips from Arco, Idaho” we decided that the logical thing to do was to head for one of the noted Natural Hot Springs near by, and by near by I mean a 1 and 1/2 hour drive, to the town of Lava Springs which is near Pocatello. Just the name Lava Springs was attractive to me, but I read that the entire town is teaming with natural springs, even some small hotels have a pool open to the public and there’s a large hot spring complex which has several pools that vary from 102-112 degrees.

We parked right across the street from the hot springs complex and bought a day pass for $5.50 (over 60 you know) which was really a bargain in my book, the complex has beautiful changing rooms,  showers and grounds where you can bring your lawn chair and picnic stuff. It is truly a bucolic setting but I have to warn you that the pools are very hot, the 112 degree pool, which in my opinion was the prettiest was just too hot for me. Leo was a lot braver and soaked in the steaming water, while I settled for the more “comfortable” 102-105 degree pools.

There’s a family and children water park a couple of blocks away (also natural spring water fed, but not as hot) and for the same day price you can go from one to the other but we settled in and stayed in the hot pools. Overall it was a very relaxing and delightful soaking that left us totally ready for a nap! 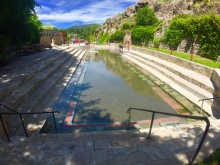 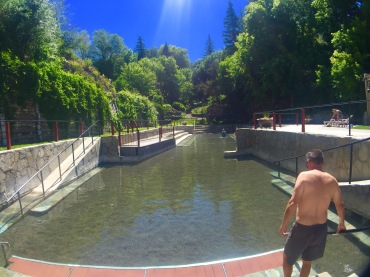 But no nap for us, we were not done exploring the area. On our drive to Lava Springs we noticed a couple of interesting if not downright quirky (which is our favorite) points of interest which we decided to check out of the way back to our campground. One of these was the Potato Museum in Blackfoot. We stopped and immediately noticed the giant “baked” potato in front of the building and headed straight for it to take a selfie and to our surprise there was a contraption, set up by the Boy Scouts, to support your iPhone and make it easy for you to take a selfie, very ingenious and convenient. They also have the cutest gift shop with everything potato.

The next stop was at Atomic City, and their famous (and only notable place) the Atomic Bar, serving up their world famous atomic beers. From there we drove down the road and saw a sign off of state road 30 for a National Historic Landmark the first Atomic Reactor built in the US for use as a power plant. We took the two mile detour to the site and found a wonderful museum, free to the public, with self guided tours of what became on December 20, 1951, the first power plant in the world to produce usable electricity using atomic energy.  Known as EBR-I, it generated enough electricity to supply all of the power for its own building whenever the reactor operated. 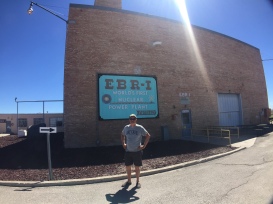 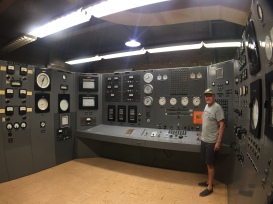 We ended our drive with a stop at Pickle’s restaurant in Arco which is famous for the “Atomic Burgers ” which Leo of course had to order and I had their special sandwhich, a turkey and bacon melt on sour dough bread, yum yum.

Tomorrow we’re off to Jackson Hole for a week where we plan to do some serious hiking, biking and eating. I’ll keep you informed and until then, happy adventures to all 😄

2 thoughts on “Craters of the Moon, Ketchum and Lava Hot Springs”

Dune building using discarded Christmas trees! What a great idea. I like to think that thousands of years from now someone will find a buried angel ( even if it’s at the bottom of the sea) and that once Walmart ornament will find it’s way to a museum 😀
I’ve come to think of this trail as my own, especially on a winter’s morning when we have it practically to ourselves. I love how it meanders through changing landscapes to provide ever changing colors and scenery 😍
It is a cupcake and champagne kind of day 😋
What a year it has been! We feel beyond blessed to have had the opportunity to travel and share adventures together. Wishing everyone the happiest of year in 2020 and look forward to more exciting travels, thanking god every day for all his blessings 😄
This year we are on the road for Christmas but nevertheless we have been blessed with love and the loveliest of gatherings with friends and family. I will carry this Christmas spirit within my heart for the year to come and give thanks everyday for the many blessings god has shed on me and my family. Love and peace to all my family and friends ❤️🎄
Just love these guys 😍❤️
%d bloggers like this: