The  next port of call during our Viking Homelands Cruise was one that both Leo and I had been looking forward to with great anticipation. St Petersburg, Russia was one of, if not the highlight of this trip. There are visa requirements if you want to tour the city on your own, but if you are part of a cruise ship tour that requirement is waved. So that is what we opted to do and joined the Viking staff for two days of guided visits.

Our first day we signed up for an in depth (5 hours) tour of the Hermitage museum. The tour of the Hermitage has been one of my greatest dreams as this museum holds one of the largest art collections in world. Our guide Lara, gave us a bit of a history lesson in the bus ride to the museum. She told us that her name Lara is the same as the protagonist in the movie, Dr. Zhivago. The movie premiered in Russia after the breakup of the Soviet Union when she was a young girl, and she thought then, that the movie was based on her life. I was captivated by this romantic notion from our guide and afterwards I was hanging on her every word. She had stories which are too numerous to go into here but she weaved a tale of the heroic city of St. Petersburg (then Leningrad) as it resisted the brutal German siege of the city during WWII. This siege was the costliest as far as casualties ever recorded in history and has been classified as a genocide with millions dying of starvation and bombardment. The Nazis also looted the palaces and other historical landmarks and carried away thousands of art works. Thankfully a majority of the art works were taken out of the Hermitage and sent by train to Siberia to protect them from the Nazis.

The Hermitage museum is the second  largest museum in the world and was founded by Catherine the Great in 1764 to house her impressive personal art collection. The collection today has over three million art objects, paintings, sculptures, furniture, and jewelry. It is said that if you were to view each item in this collection for one minute each, it would take you eleven years (with no sleep or eating time) to complete it. It is a massive complex that encompasses the Winter Palace (the former residence of Russian emperors starting with Peter the Great) and six additional buildings which were annexed to house the ever growing collection. The palace is situated in an impressive plaza surrounded by historic buildings and anchored at its center by a huge monument commemorating Russia’s victory over France during the Napoleonic wars, the Alexander column. From this square the Winter Palace facade can be taken in with its Baroque styled green and white elongated square, inner gardens and courtyard as well as the Rococo styled gold filigree design above the columns and windows. It is a very impressive site to say the least. 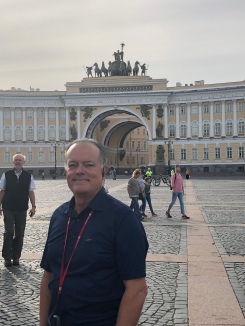 We arrived at the Hermitage an hour earlier than the 10AM public opening as Viking tours are granted an early entry ahead of the mobs of people that were already lining up. The “privileged entry” is definitely one of the perks of traveling with Viking, in my opinion. Knowing we could get in before the crowds gave us plenty of time to walk and explore the entire plaza at a leisurely pace. We took some time to admire the colossal Atlantes figures that decorate and act as the columns to the entrance of the New Hermitage building next to the Winter palace. This is one of the annexed buildings to the hermitage museum and it is impressive to stand under these granite muscular giants, a preview for the wonders we would see inside the palace.

As we were escorted in earlier than the regular museum visitors, we accessed the first building via the grand Jordan staircase which is a dazzling display of marble and golden stucco columns. From there we spent four hours visiting the throne room and pavilion halls with gilded columns and chandeliers sparkling above. It was really overwhelming to see the opulent display of power and wealth. But the main event was the vast collection of masterpieces from Rembrandt, Titian, Michelangelo, Rubens, Rafael, you name it, they have it. Our guide concentrated on these masterpieces from the renaissance and northern European art, there was just not enough time to see it all. By the end of the tour the halls were mobbed with people and it was slow going but our guide did an excellent job of zipping us in and out of crowed areas and getting us to the front of the major pieces. I really needed a week here at a minimum but as we only had this day, we made the most out of it and enjoyed and savored our visit, including a few precious minutes at the museum shop which is one of my favorite things to do at any museum. 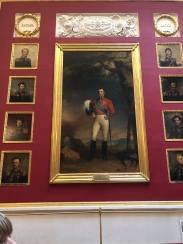 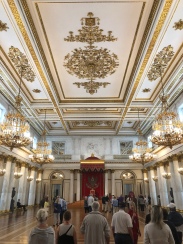 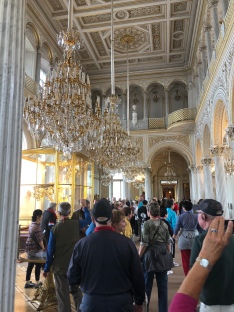 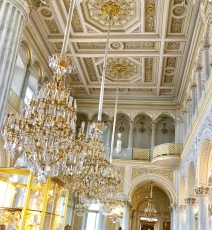 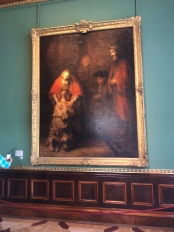 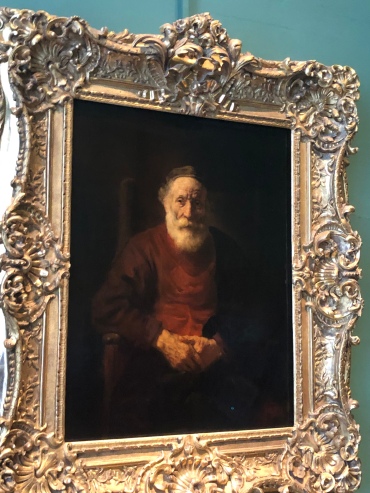 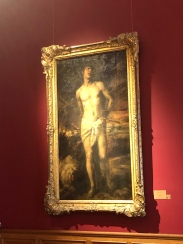 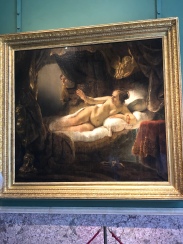 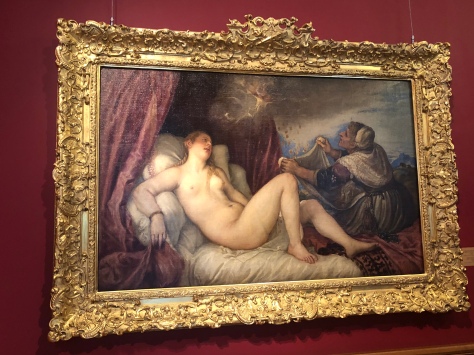 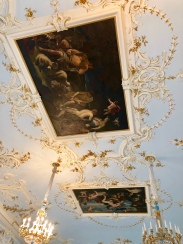 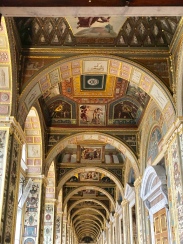 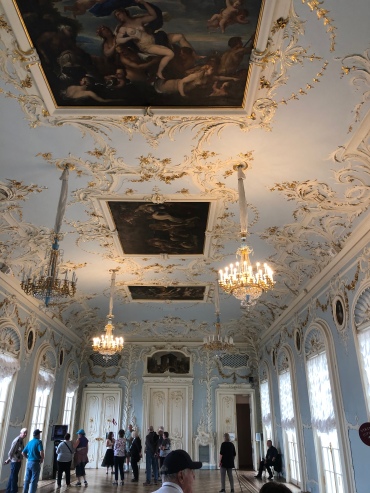 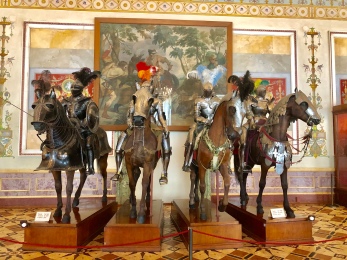 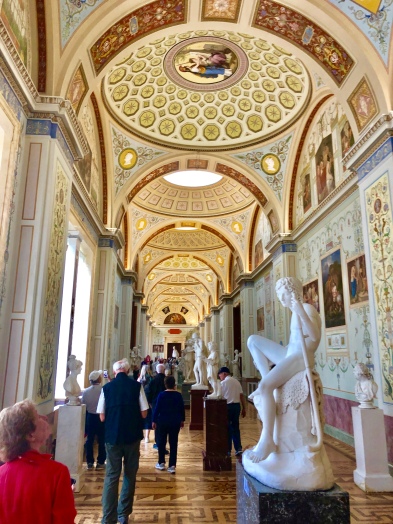 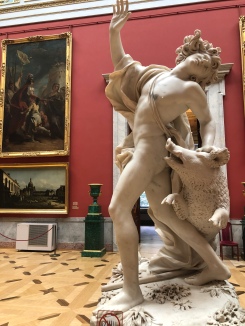 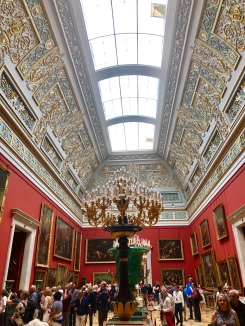 The next day in St. Petersburg was devoted to a “Panoramic Tour” which in Viking Cruise lingo means a combination of bus tour and some strategic stops in the city for walking and picture taking, sightseeing and shopping, all things which I love to do. We stopped at the Nakhimov Naval Academy which is a beautiful building of the most beautiful blue color. The academy provides military education for boys starting as young as 13 years of age. Immediately across the street from the academy you can also visit the war ship “Aurora” docked in the river and now a museum. This Russian cruiser was in service in the pacific before it was returned to St. Petersburg under US protection. The attack on the winter palace which many historians say was the formal start of the Russian revolution, was initiated by a canon shot from the Aurora which signaled to the revolutionaries to start storming the palace. 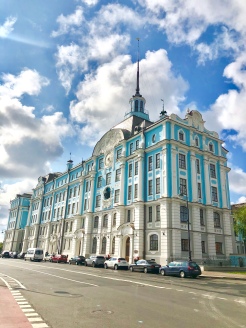 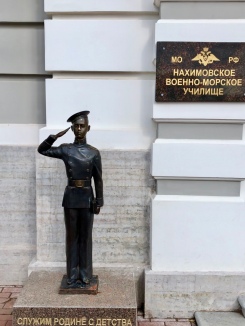 One of the striking architectural features of many buildings in this city are the onion domes which are such iconic symbols of Russia. These domes have a historical as well as a popular lore foundation. Historically they are from the Byzantine time architectural style (think Istanbul). The popular lore is more appealing to me, they are shaped like burning candles to take you to another mystical dimension. They also represent life, what happens when you peel an onion? You cry, just as when you are born and then your life keeps unfolding as you peel the onion. I thought this analogy was fabulous and the city of St. Petersburg just as fascinating. 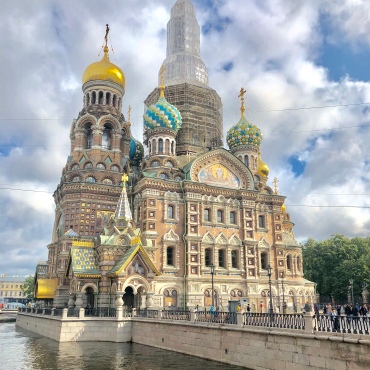 We would like to return for another visit and explore this amazing country. I’ll leave you with a couple of videos from the Hermitage museum.

One thought on “St Petersburg, Russia”